Milltown Village (Baile an Mhuilinn – town of the mill) was previously known as Belnaleck (Béal Ath na Leice, the mouth or gully of the ford of the flagstones) by O’Donovan. It was later called Milltown taking its name from the mill. The land owned by the mill was called the Annsley Estate and was made up of the same townlands as the Abbey lands; Ardonan, Derrygerraghan, Drumherriff, Derryvehill, Drumgesh, Drumlane, Kilnacranagh and Uragh. The chief mill was in Artoney and belonged to Mr. Griffith. It was later run by James Phair for Mr. Griffith. The tennants had to have their grain milled there. The mill was situated at the back of the house at Artonagh Lodge and reached back out on to the “flat road to Killeshandra” which ended at the mill. The only road from Milltown to Killeshandra at that time was by Drumnoose, Drumkierl etc.

The big house in Milltown was a fever hospital during the famine years 1845-1847. There were two other branch hospitals but no evidence of either remains. One was located in the big field at Milltown Cross and the other one was on Lambs Lane. The hospitals were under the care and attention of Dr. O’Donovan. At the time of the famine 400 people approximately lived in the vicinity of the village.

Rev. Eoin O’Reilly, Parish Priest, built the first church in Milltown in the year 1780. This was a thatched church and served up until 1868 when the present church was built on the same site but further back. At the time the ground levels were not the same and the hallow at the back had to be build up to the same level. It was proposed at the time to build the new church at the crossroads in Milltown however the land was not granted. The new church was build by Rev. Pat O’Reilly and opened in 1868.

Was built at the centre of the village during the years 1867/1868 to replace a thatched barn type chapel which had stood on the same site for roughly one hundred years. The architect who designed it was Mr. William Hague of Cavan and Dublin. The contractor whose building firm constructed it was Mr. Hugh Kelly of Granard, Co. Longford. The parish priest of Drumlane at the time was Fr. Patrick O’Reilly and the curate was Fr. John O’Reilly. The walls of the new church were built from local limestone interspersed with level courses of sandstone. White brick was used for the dressing of the doorways and windows, with sandstone for the sills and arches. Bath stone was used extensively within the interior of the building. This was supplied by Silthorpes of Dublin.

The Dedication Ceremony for St. Patrick’s Church took place on Pentecost Sunday, 31st May 1868. On that occasion Solemn High Mass was celebrated by Bishop Nicholas Conaty. A special sermon was preached by the celebrated pulpit orator Fr. Thomas Burke, O.P. The ceremony concluded with Benediction of the Blessed Sacrament given by Bishop John Brady of Perth, Western Australia.

The first school in Milltown was on a site at the junction at the top of Monea. It was a head school. It was started around the year circa 1824. The school was owned and run by the head master Mr. Edward Rudden. The new school was built after that in 1863. The new site was purchased from Mr. Charles Brady and since then the school has remained on the same site.

There were also three Blacksmiths located in the village.

The barrack was situated where the Parochial House now is. 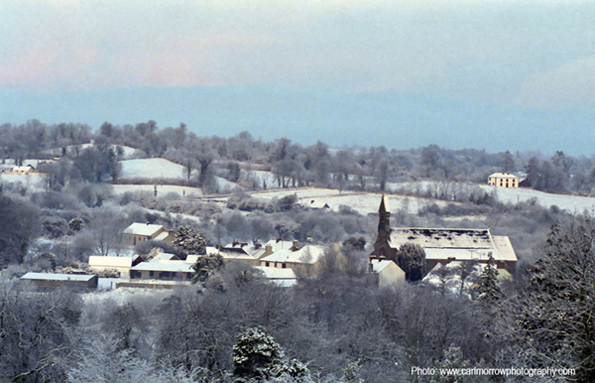